Sayonara, Abechan: A Brief Affair with a Japanese holding midfielder 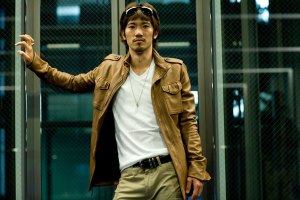 This weekend, news emerged (as always, on Twitter) that Yuki Abe was returning to Japan to rejoin his previous club, Urawa Reds. So comes to an end an unlikely, and all too fleeting, love affair with a player who brought understated calm to a team in various stages of flux over the past 18 months.

Abe was signed during the brief reign of (although not necessarily by) Paolo Sousa. An experienced Japanese international who played in the 2010 World Cup, Abe’s signing was nevertheless seen by many City fans and external observers as a vanity signing and marketing manoeuvre, designed to boost our profile in the lucrative Asian market. Abe’s early appearances under Sousa seemed to bear this view out, as he was shoehorned into right midfield and full-back in a disorganised shambles of a team lacking confidence, discipline and fitness.

The swift departure of the Portuguese heralded a fresh start for many amongst the inflated squad, Abe included. I first witnessed a full 90 minutes of Yuki in early November 2010 at Oakwell, Barnsley, when Sven Goran Eriksson’s team were beginning to get into their stride after a couple of decent wins away at Leeds and at home against Preston. Abe sat behind Andy King and Richie Wellens and in front of the previously leaky City defence, efficiently gaining possession in his own half and playing simple, effective and telling passes to his more attack-minded midfield compatriots. He bossed the midfield that day, covering yards without ever seeming to break into much of a sweat; never a tackle misjudged, never a pass misplaced. Abe trotted over to the travelling City fans at the end of the game, clearly shattered. I raved about his performance on Twitter on the way home, and immediately gained several new Japanese followers. Clearly this was a man loved and looked out for by fans of his previous club.

Abe went on to have a fairly successful 2010-11 season, City winning 12 of the 26 games in which he started – a higher win percentage than any other Leicester midfielder (hat-tip: Foxblogger). His performances apparently alerted more illustrious names – Manchester City were reported to be interested in adding Abe to their already lengthy list of defensive midfielders.

In a generally satisfactory first season in English football for Abe, one thing continued to elude him – a goal. I used to dream of how what it would eventually come about. The dream would usually end with me tussling his hair as he was mobbed by his adoring teammates after a 25-yard zinger into the top corner. As it happened, the goal, when it eventually did arrive, was almost as magical as I’d hoped – a fine strike into the bottom corner in a final day of the season romp against Ipswich Town. Abe was indeed mobbed by his teammates and a louder cheer was rarely heard in the whole season at the soon-to-be KP Stadium, a reaction which demonstrated his popularity at the club.

The pre-season money available to Eriksson for new signings always seemed likely to create problems for Abe. As the least conspicuous of existing midfielders (Wellens’ Hollywood passes and King’s goals hogging the headlines), the arrival of Neil Danns, Gelsen Fernandes and Michael Johnson meant he was seemingly well down the pecking order. Abe did, though, start the first game of the season against Coventry City and went on to feature semi-regularly until Eriksson’s sacking in mid October. Despite a recent, brief return to the side under Nigel Pearson, his days looked numbered from the moment Eriksson, clearly a fan, left the club.

Now, at 30 years old and apparently homesick, Yuki has been allowed to leave the club. It’s a move that makes sense for both parties; Pearson is rebuilding a clearly unbalanced squad in his own image, the signing of Danny Drinkwater demonstrating his intent to sign young, hungry, preferably British players which he can develop, while Abe apparently still has family commitments in Saitama City, a place where he is still adored by Urawa Reds fans.

Nonetheless, this not unexpected move still arrives with some sadness. Yuki was loved, perhaps primarily, for how un-Championship, how…un-Leicester…he was. He isn’t particularly quick, nor particularly strong. He doesn’t score goals, like Andy King, or play defence splitting passes like Richie Wellens. He doesn’t beat his man and swing in a cross of pinpoint accuracy like Steve Guppy did, or shout and bawl and scrap like Neil Lennon. Abe, quite simply, knew his strengths and played to them. His positioning was excellent, consistently intercepting balls and allowing the rest of the team to regroup before playing a simple pass forwards or sideways to more creative players. He was rarely booked, his tackling unerringly accurate. His floppy, bowl-cut hair and unassuming demeanour made him seem like either the quietly popular friend of the main Jock from an early 90s Californian teen comedy or a visitor from a more peaceful and prosperous future. I could never quite decide which.

If you’re reading this site, you’re probably a Leicester City fan. We’ve had brilliant players, we’ve had bloody terrible players. Generally, you love the greats and put up with the rest. But sometimes, a player comes along who, for no obvious reason, strikes a chord. You might follow his career with interest even after he leaves the club, or find yourself defending his performances, even when you know he’s been below par. You find yourself watching his curling free-kicks for his previous club on Youtube and cursing the manager for never giving him the opportunity to do the same here. You’re disappointed when another player signs in the same position.

For me, Yuki Abe was that player. He’ll never go down as one of the best, but he’ll be remembered very fondly indeed. Gambatte, Yuki. I hope you know you were appreciated.